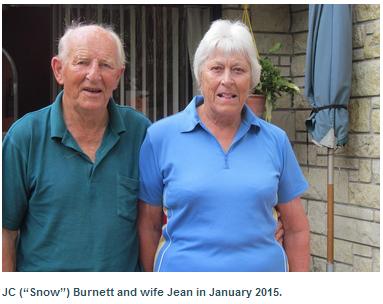 To acknowledge the oldest known survivor of our early teachers Ron Gibbard visited Snow in Thames in January 2015 and wrote up this resume’ of his teaching career.

Mr Burnett was Head of English at Otaki DHS/College over two periods in the 60’s. His blond hair led to students referring to him affectionately as “Snow” Burnett.

In extramural activities Snow was heavily involved with coaching both Cricket and Rugby as well as producing Dramas which were presented in the Otaki Memorial Hall.  He had a wonderful command of the Queen’s English and had a string of quotes that were often used as class lines e.g. those who failed to hand in their homework were asked to write 20 lines of “Procrastination is the thief of Time !”. Snow held a number of overseas teaching positions. He ended his teaching career as Deputy Principal of Dilworth School, Auckland in 1988.

He and his wife Jean retired firstly to New Plymouth and then to Thames – “I was looking for a place to launch my boat”. Even at 84 years of age Snow is still a keen golfer.

Upon completing his M.A. degree at Victoria University in 1953 Snow attended Auckland Teachers’ College. The following year he returned to teach French, German and English at his alma mater Wellington College. He married Jean in 1957. At that time all Secondary School teachers were required to teach in a ‘country’ or rural school. They selected Suva Boys’ Grammar School in Fiji, as it followed the NZ Curriculum. 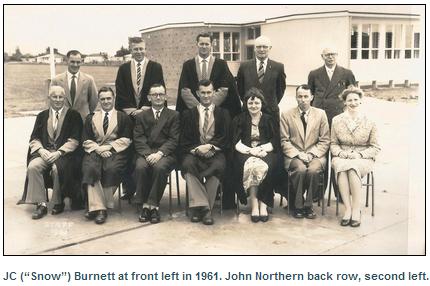 Snow returned to NZ in 1959 and, by chance, met up with an old Wellington College and Victoria University mate by the name of John Northern. The latter had taken up a position at Otaki District High School, which had opened that year and he was instrumental in persuading Snow to successfully apply for the position of HOD English there.

After only two years in Otaki the Education Department asked him to take up a position in Indonesia at Jakarta University. He taught post-graduate students and assisted staff members complete their theses in English.

Having been granted two years leave of absence from Otaki Snow returned to Otaki College until the end of 1966. During this period he was approached by the local Chinese spokesman Mr. Jo Gow to run weekly Wednesday English classes at the College to help improve their accuracy and fluency in spoken English. This innovation was to become a most rewarding, successful undertaking that was greatly appreciated by the Chinese community. Snow was also elected onto the Otaki Borough Council with his main brief being improving the Otaki Beach surrounds and amenities.

Late in 1966 he was offered, via the NZ Diplomatic Service, a Colombo Plan position in the Bangkok Language Institute. This entailed supporting upper-echelon Thai officials and commercial personnel. During this time he wrote a book “Readings in English for College Students – with Exercises” that was published for use in Thai Secondary Schools.

On returning to NZ in 1969 Snow became HOD English and French at Opotiki College for one year before returning to Fiji as Head of Preliminary English at the University of the South Pacific in Suva.  This posting lasted for four years. In 1975 he was appointed as Head of English and French at Dilworth School in Auckland and was appointed Deputy Principal later that year. Snow remained there 14 years until his retirement from a wonderful service of teaching.

Ron Gibbard adds his own insights:

Snow Burnett was my favourite teacher for a number of reasons:

He was always calm, well-prepared and had a deep knowledge of his subject material.  He loved French and taught the subject in a way that it became my favourite subject – even above Mathematics!

Snow had a wonderful way with words and developed my reading beyond Cricket and Jack London dog stories - In 1961 I had to wear formal College dress, including long grey trousers for the first time, to host the first Otaki Scholar to visit our College. On my entering his class that morning he announced “Gibbard, you are a picture of sartorial elegance”. I had to ask him what the phrase meant! Since that moment I have worked hard to expand my vocabulary.

He coached me in both rugby and cricket (more successfully in the round ball game). I am grateful for the hundreds of hours Snow, and other teachers, put in so that we could enjoy our sport at Otaki College. They were also often our only means of transport to our away games.

At my 21st birthday Snow Burnett’s speech was based on Rudyard Kipling’s poem “If”. It became a constant guideline for me in my personal life and teaching career.

In conclusion, a good teacher develops his or her student’s confidence and knowledge and lifts their horizons to the point that they will not need to rely on that teacher in their life beyond College. In doing that the teacher can become an inspiration for that student for a lifetime.

To me Snow Burnett was such a teacher.